In the previous few posts, we spent time reversing how the Netgear R6200’s HTTP daemon parses a firmware header before writing the firmware image to flash. The goal was to work out how the 58-byte firmware header is constructed and how to generate a new one that can replace the header in a stock firmware. In the end we identified the purpose of all but 4 bytes. The regenerated header plus the original TRX firmware image allowed the HTTP daemon, running in emulation, to reach the stage where it would start writing data to the /dev/mtd1 flash partition. Considering this a win, we’ll now circle back to analyzing upnpd.

In this and the next part, we’ll compare the way upnpd parses and validates the firmware header to that of httpd. Having developed a baseline understanding of how the header is parsed by httpd, analyzing upnpd is much easier.

As in previous installments, the exploit code has been updated. Since we’re switching back to upnpd in order to analyze how it validates the firmware, the repository contains separate modules for that. Look for janky_ambit_header.py and build_janky_fw.py. You can find the updated code and README in the part_8 directory. Now is a good time to do a pull or to clone the repository from:
https://github.com/zcutlip/broken_abandoned

As we discovered in part 4, a firmware larger than 4MB will crash upnpd due to an undersized memory allocation. Obviously we won’t be able to strap a header to the front of a stock TRX image like we did with httpd; it’s way too big. Shrinking the firmware will be a challenge for later. If it turns out that we can’t even get so far as writing the firmware to flash memory without crashing, it won’t matter that you were able to shrink and re-pack the firmware. Instead, just dd out a little less than 4MB of random data from /dev/random and prepend a header to it. If you can get upnpd to write that image to flash, you win this stage and may advance to the next level.

Once we get past the undersized malloc() at 0x00423C24 in sa_parseRcvCmd(), the firmware is successfully base64 decoded out of the SOAP request. Then, at 0x00423C98, a function named sa_CheckBoardID() is called. 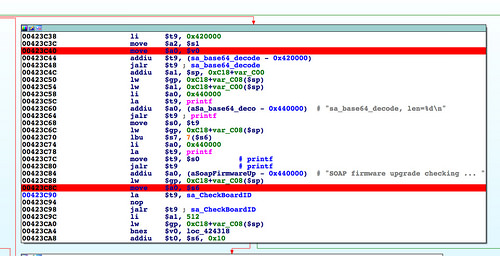 This function should be familiar. It’s nearly identical to the abCheckBoardID() function I described in part 5. So identical, in fact, that the buffer overflow via memcpy() I described previously is in this function as well.

Even the Buffer Overflow is the Same

To recap, the memcpy() is bounded only by the size value from the header. Since we control that value, we get precise control over how many bytes are copied into the destination buffer.

I didn’t go into detail about the buffer overflow before, because I wanted to wait until I could discuss it in the context of upnpd. In the HTTP server, this isn’t an interesting vulnerability. In that case, it is a post-authentication vulnerability. You would need to bypass authentication or trick a user into uploading your malicious firmware. If you’ve accomplished either of those, there are much more useful things you can be doing with your time than exploiting buffer overflows.

In the case of upnpd, this same vulnerability doesn’t require authentication, making it much more interesting. Here’s what’s neat about it:

This is a straightforward buffer overflow. If you’re new to stack based buffer overflows, or just new to exploiting memory corruption vulnerabilities on MIPS, this is an easy one to practice with, especially if you have the debugging environment I described here set up.

However, as I said in the first part of this series, one of my self-imposed goals was to avoid exploiting bugs along the way. We’re trying to flash a firmware without crashing, and any bugs along the way are obstacles to overcome.

Working through this function reveals the same header fields that we discovered in its httpd counterpart: The magic number, the size and checksum of the header, and the board ID string. These fields are found at the same header offsets as before.

Mystery Header Gets a Name

There is one new piece of information, however.

At 0x00423088 there is an error message that we didn’t see in httpd: “Not Ambit image … reject!!!”. This is the first indication of any sort of name for this file format. This explains why you may have noticed references to “ambit” or “ambit header” in previous code fragments I’ve posted.

In the next part, we get close to writing the firmware image to flash memory. We’ll have to do some binary patching to work around the fact that QEMU doesn’t actually have flash memory.